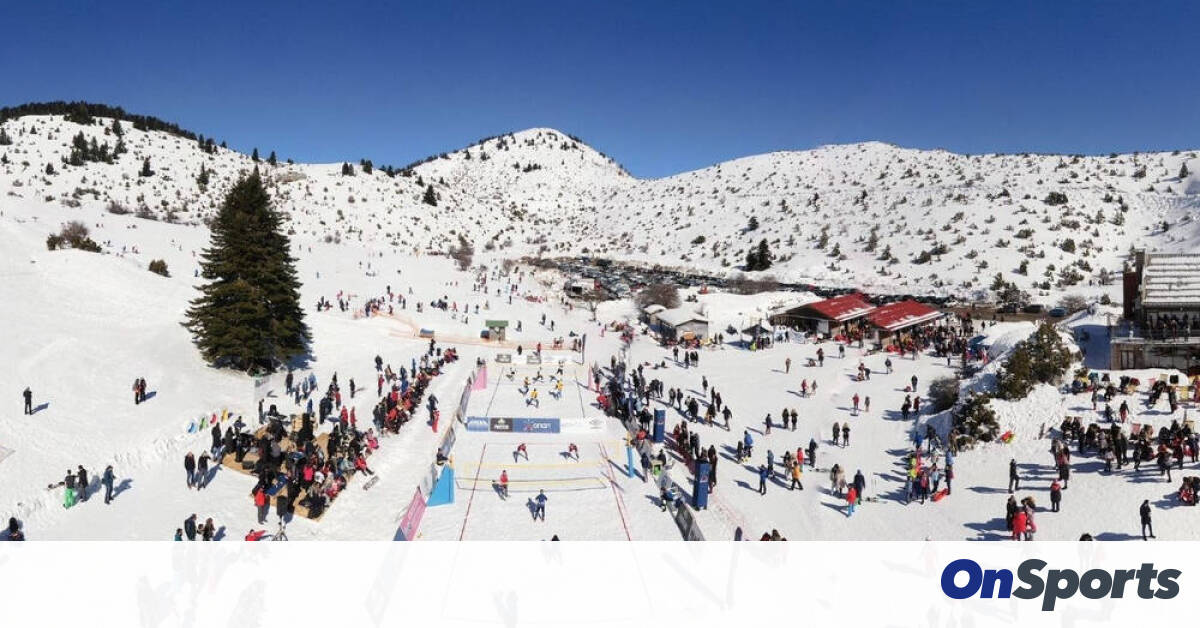 After a two-year hiatus due to the coronavirus pandemic, the Hellenic Volleyball Federation with the support of the Municipality of Tripoli and the Peloponnese Region announces the organization of the 3rd Panhellenic Snow Volley 2022 Championship to be held for the second time (after 2019) in Chinoros Of Arcadia.

The pan-Hellenic event will take place between 12-13 February 2022 and will highlight the Greek champions for 2022 in the men’s and women’s categories.

At the beginning of the new year, 2022, the competition announcement will be issued, with all the useful information for the interested teams and at the same time the sponsors and supporters of the 3rd Panhellenic Snow Volley Championship will be announced.

Representation of E.O.PE. consisting of the Vice President of the Board Taki Antonopoulos, the member of the Board Eleni Kazakou and the president of ESPEP. Theodoros Kanellopoulos visited Tripoli and the ski resort in Mainalo. They were warmly welcomed by the Mayor of Tripoli, Konstantinos Tzioumis, the Deputy Mayor of Sports of the Municipality of Tripoli, Dimitris Makarounis, and the owner of the ski resort, Theodoros Chronopoulos.

The mayor of Tripoli, Konstantinos Tzioumis, as the host of the event, stated: “We gladly accepted the proposal of the Hellenic Volleyball Federation to co-organize together with the Mainalo Ski Center for the second time the Panhellenic Snow Volley Championship. We will support the event with all our strength, we trust the Volleyball Federation to carry out the games. Our area is advertised, so it will be a great opportunity for athletes and spectators to come from other areas. “Our goal is to make our area a permanent sports destination and Snow Volley is a first-class opportunity to promote our place.”

Makarounis: “With snow volley against the pandemic”

The Deputy Mayor of Sports of the Municipality of Tripoli, Dimitris Makarounis, stressed: “We gladly accepted the Volleyball Federation. We will help so that our place is advertised by supporting the actions of EOPE. I am sure that there will be a successful event with a positive sign and people will enjoy the games and have a good time at the Mainalo Ski Center. “Our response to the pandemic and always with all the health protocols will be the sports actions and the Snow Volley championship will be an opportunity to gather not only volleyball players but also athletes from all sports”.

Christos Lambropoulos: “Restart of all activities”

Peloponnese Deputy Governor Christos Lambropoulos welcomed the return of Snow Volley to the Peloponnese: “We are making an effort to restart all sectors of the economy and activity in our city after the two years of the coronavirus. The organization of the Panhellenic Snow Volleyball Championship is welcome and the Region views with a positive eye all the events that touch the youth, increase the extroversion because the goal is to attract people. “Through these events we can be able to highlight the reasons that Arcadia and the Peloponnese should be a destination for Greeks and foreigners.”

Tripoli, formerly known as Tripolitsa or Dropolitsa, is the largest city and capital of the Prefecture of Arcadia. It is built on a plateau at an altitude of 660 meters. Its population is 30,090 inhabitants, while the population of the homonymous Municipality is 47,457 inhabitants. Tripoli is a modern city with strong building development in recent years and is constantly expanding. It is also the seat of the Peloponnese Region.

Service in the mountain of Panos

The ski center on the mountain of Mainalo, the mountain of God Pan, the  protector of stockbreeders, hunters, fishermen and shepherds with permanent residence in nature. The mountain range of Mainalo occupies the center of the Peloponnese and a large part of the Prefecture of Arcadia. It stretches from the plateau of Tripoli to the river Lucio in the west and from Megalopolis to the lake of Ladonas in the north, in an area of about 1,000,000 acres. The continuous alternation of dozens of peaks and ravines with hundreds of mountain meadows and plateaus, give an impressive relief. More than 50 peaks exceed 1500 m., Among which dominate Ostrakina 1982 m., Maple 1882 m., Gelati 1870 m. And Aintinis 1849 m. The whole area is a vast cultural park, with remnants of ancient , medieval but also newer traditional settlements, temples, monasteries, stone bridges, watermills, cobblestones and paths. A simple tour of the mountain, recalls historical memories from our ancestor Arkadas to the Kolokotronian liberators, when Mainalo was the cradle of the Greek Nation Revolution.